The zoo may only encompass 49 acres of space in Chicago, but Lincoln Park Zoo’s footprint so much larger than you’d think. International-level conservation work, advances in animal care, and research and education take place here every single day of the year as part of our mission to connect people with nature, continually expanding our influence.

It would take too long to list all of the accomplishments that the various departments at the zoo, from Horticulture and Learning to Operations and Events, achieved this year. Going into 2023, the zoo will continue the science-backed efforts that make this zoo both a favorite local destination and a worldwide leader in conservation.

Here are a few exciting things that happened at the zoo this year:

1. Megan R. Ross, Ph.D., becomes the first woman to lead the zoo and the first scientist in that leadership role.

Starting January 1, 2022, Ross ascended to the position of President and CEO, bringing a fresh new perspective with the four Cs: care, conservation, community, and culture.

2. Pilipili the African lion cub was born on March 15!

The birth was the result of a breeding recommendation from the African Lion Species Survival Plan®, which manages populations in Association of Zoos and Aquariums (AZA) accredited institutions, for male lion Jabari and his mate Zari. Adorable Pilipili has surpassed many required milestones over the past nine months. He is now approaching young adulthood and expecting one or two little siblings, as Zari is pregnant again!

3. The zoo welcomed many other new arrivals, from Utenzi the rhino to a Carlsbad green tarantula trafficked into the U.S.

These included Namiko the Asian small-clawed otter and Utenzi the eastern black rhino. Other additions over the year have included a prehensile-tailed skink, Nisha the female red panda, Reo the klipspringer, a black-and-white colobus monkey infant, Egyptian fruit bats, and a Carlsbad green tarantula. This arthropod was confiscated by U.S. Fish and Wildlife Service officials at O’Hare International Airport and is being housed as part of the zoo’s commitment to reducing animal trafficking around the world.

4. The zoo returned to a full schedule of events, including Run for the Zoo.

The COVID-19 pandemic turned some events virtual and cancelled others in 2020 and into 2021, but as of this year, Lincoln Park Zoo events are back in-person and better than ever! Run for the Zoo, for example, finally roared back after being enjoyed in a self-directed format for the last two years. Lincoln Park Zoo also collaborated with Alamo Drafthouse Cinema (coming soon to Wrigleyville) for an on-grounds movie fest in September 2022 featuring the films CATS and The Lion King. And ZooLights Presented by ComEd and Invesco QQQ continues a long-standing Chicago tradition through January 8. These events continue to fund the zoo and keep it free and open 365 days a year.

The zoo’s Animal Welfare Science Program helps determine how to make on-grounds changes that help species here thrive. Some of the changes this year have included resurfacing the pond for aquatic turtles at Pritzker Family Children’s Zoo, terracing portions of the red wolf habitat to reduce soil erosion and increase the number of elevated areas the wolves like to rest on, adding vegetation to the Puerto Rican parrot habitat at Regenstein Small Mammal-Reptile House, incorporating substrate that allows the red river hogs to root and wallow, and providing sod for foraging and walking on in the chimpanzee habitat at Regenstein Center for African Apes. It has also included initiatives such as adding dig pits to the naked mole rat habitat to allow them to engage in digging behaviors.

6. The zoo’s social media pages, communicating animal and conservation initiatives as well as the great work done by staff to the public, have grown.

From a new TikTok page launched in September to the continuation of ABCs of the Zoo YouTube series, Lincoln Park Zoo has been expanding and enhancing its social media presence. Explore the on-grounds work done by Horticulture staff in video installments like H Is for Horticulture, enjoy cute videos of zoo residents, interact with takeovers from teen program participants, or follow along on #LionWatch as we get closer to the birth of a new lion cub (or several!).

7. The zoo won awards for the renovation of Pepper Family Wildlife Center.

The sensitive re-creation of the original lion house building from 1912 was recognized with these honors in 2022: the Chicago Innovation Award, the Landmarks Illinois Richard H. Driehaus Foundation Preservation Award for Rehabilitation, and a Chicago Landmark Award for Preservation Excellence, to name a few. The data-driven considerations that went into renovating the lion habitat at Pepper Family Wildlife Center, completed in 2021, directly contribute to the lions’ excellent care—including Pilipili’s!

8. The zoo became ever more inclusive, progressing toward making this a place For All.

Visitors to the zoo can now use an accessibility map that provides guests with information for planning during their visit. Visual schedules available at Searle Visitor Center provide visual and tactile icons to help people plan a visit, transition between activities, and reflect on their experience.

The zoo has recently been recognized as a Seizure Smart Partner by the Epilepsy Foundation, after also having been certified as Sensory Inclusive by KultureCity in 2021. And the planning continues; more inclusive interpretive elements, designed with partners in the disability community, are planned in the years to come.

9. The zoo’s Urban Wildlife Institute (UWI) partnered with the City of Chicago and Chicago Animal Care and Control to release the Chicago Wildlife Management & Coexistence Plan.

In January 2022, the zoo announced this innovative and science-based plan for Chicago, which was developed by a network of UWI scientists to equip public and city officials with novel approaches to developing and maintaining a thriving urban ecosystem across the city. Not only does the plan show how citizens can cohabitate with and respond to wildlife, it serves as a template for other cities who want to engage in responsible conservation of local and native species of all kinds.

10. The zoo took great care of its birds in the face of high pathogenic avian influenza (HPAI), or bird flu.

HPAI had a devastating effect on bird populations around the country, and Lincoln Park Zoo acted early to minimize its impact by proactively safeguarding the feathered animals in our care. Many were shifted to indoor housing and behind-the-scenes locations, but still received the best of care from keeper and veterinary teams while in alternate spaces.

While their absence was sad for guests who missed their presence in the beautiful ponds inside zoo grounds during early spring and summer, this ultimately paid off. The birds—who remained healthy and safe throughout the spring migration period—were slowly able to return to outdoor habitats.

While 2022 was an exciting year for those of us who are lucky enough to be at the zoo day in and day out, we’re looking forward to an even better 2023. Happy new year, everyone! Anyone who has ever worked with animals or had a pet knows it’s not all feeding, playing, and interacting. There are messes to clean, animal personality quirks to learn, and a lifelong commitment made to health and welfare. For the keepers here at Lincoln Park Zoo, this is no exception…and add to the equation that… 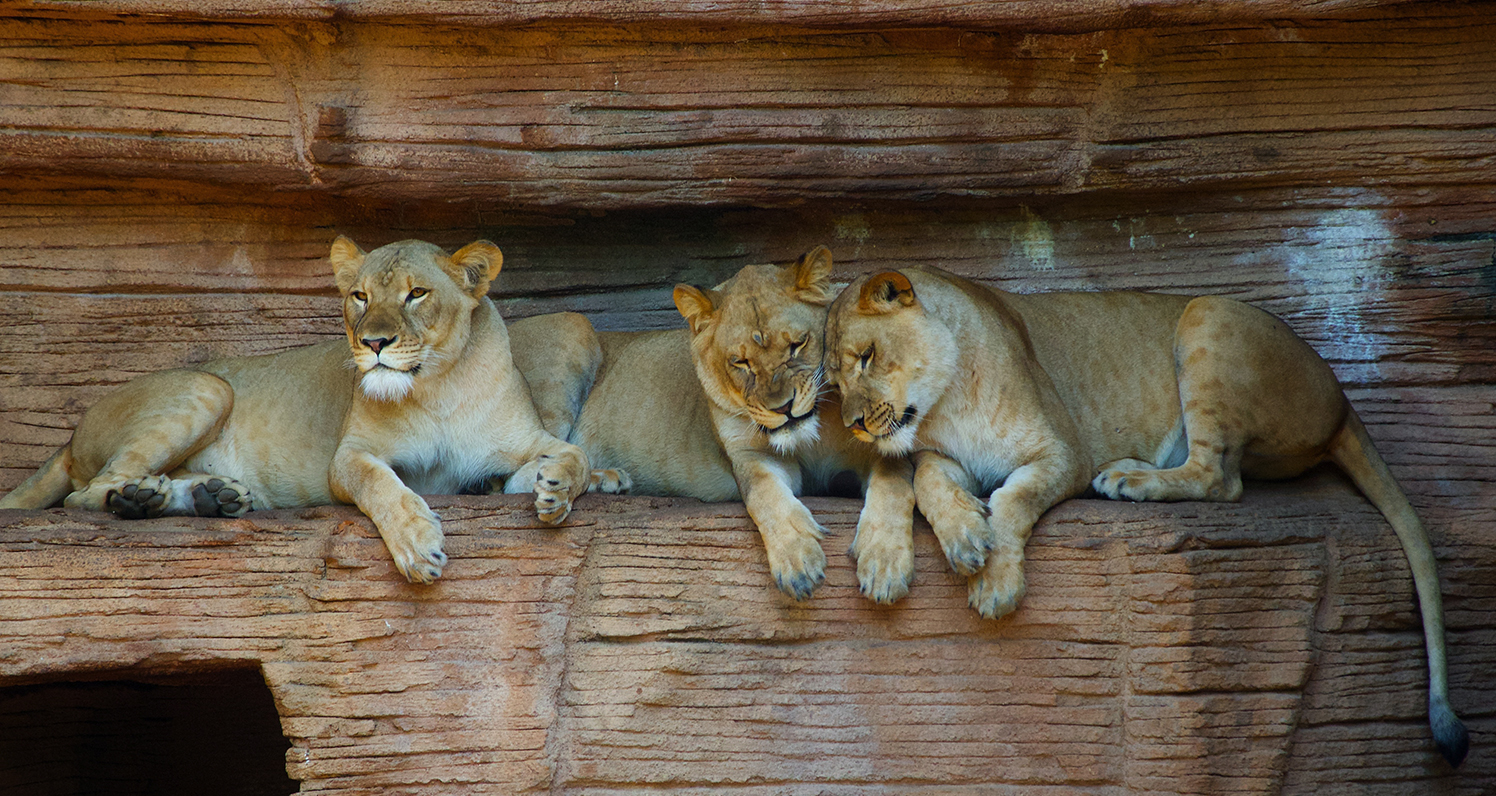 Above: African Lion females. Photo courtesy Riverbanks Zoo & Garden. The cat’s out of the bag! Lincoln Park Zoo is excited to announce that Pepper Family Wildlife Center is opening to the public Thursday, October 14—welcoming lions and other carnivores back to Chicago. Joining the zoo is a pride of lions, including one male and… A legacy continues… In 2020, Lincoln Park Zoo said goodbye to 34-year-old eastern black rhinoceros Maku due to age-related health issues. An ambassador for his species, Maku helped sustain the population of critically endangered black rhinos through his six offspring as part of the Eastern Black Rhinoceros Species Survival Plan® (SSP) and was the second-oldest…